This study has been completed. View the Final Report »

Following Governor Shumlin’s announcement in May 2011 that the Circumferential (Circ) Highway as originally conceived will not be built, a CIRC Alternatives Task Force was formed to identify alternative projects and planning activities to address the region’s transportation issues. One of the major planning activities undertaken was the Williston-Essex Network Transportation Study (WENTS). The focus of the WENTS Project was to develop multimodal strategies that enhance corridor mobility and safety, improve access to major employment and retail centers, and support land use goals of the municipalities of Williston, Essex, and Essex Junction.

The WENTS findings and recommendations, which were formally adopted by the CIRC Alternatives Task Force in January 2013, specifically cited the Exit 12 & VT 2A Project as a key network improvement within the region. A re-configured interchange at I-89 Exit 12, in association with new local roads connecting VT 2A (between Exit 12 and Marshall Avenue) with the major retail centers in the area was seen as generating significant mobility benefits for the study area as a whole.

The Exit 12 Project further investigates and refines transportation alternatives that address existing and projected traffic congestion in the study area (see map below); enhance safety for all users; improve bike-pedestrian connections from areas south of the interchange to the existing network north of the interchange; and advance economic growth in the area.

SEE BELOW FOR MORE INFORMATION ON: 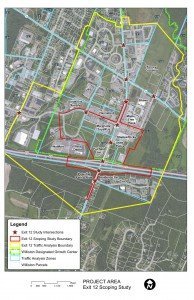 An Advisory Committee was formed to provide general oversight and policy direction for this project.

The committee was comprised of the following representatives: